Transition Town Kingston are hosting a pre-launch celebration of my new book, The Transition Timeline, at the Kingston Odeon on the 15th March (this Sunday) from 5:30pm. This event will also form part of the nationwide People's Premiere of new film The Age of Stupid, directed by the inspirational Franny Armstrong, produced by Oscar-winning John Battsek, and starring Oscar-nominated Pete Postlethwaite. Tickets for the event are £10 and can be ordered here. For this you will be amongst the first to see The Age of Stupid, enjoy a live satellite link-up to the simultaneous premiere taking place in a solar tent in Leicester Square(!), witness the launch of the international "Not Stupid" campaign, and have the opportunity to discuss the film with both me and Hilary Gander, one of the founding members of the Campaign against Climate Change. I will also be selling and signing copies of The Transition Timeline at the Kingston screening, which will be the first opportunity for anyone to get their hands on a copy! Over 100 tickets, of a capacity of 337, have been sold even before the main announcements, so make sure you book soon if you want to come support me and The Age of Stupid. Also bear in mind that the faster tickets sell for the premiere and opening weekend of the film, the more cinemas will show it as it is rolled out nationwide, so you can play your part in the success of this important and brilliant film, which I believe has the potential to radically shift popular conceptions of climate change. Al Gore's An Inconvenient Truth had a major impact, and this is a much better film. You won't regret seeing it. After the events at the Odeon we have an area reserved at the Acorn 20 bar just across the road, from 8:15pm. Food can be purchased there, and those who cannot make the Odeon screening are welcome to join the celebrations there or pick up a copy of the book - 20 Richmond Rd, Kingston, KT2 5EB. I know that a number of people who were keen to come will be unable to attend these events in Kingston as they are attending The Age of Stupid People's Premiere in another of the 65 participating cinemas around the country, so they will be welcome at my official book launch at The Totnes Bookshop in Totnes High Street, Devon from 7pm on Wednesday 1st April. For those who can't make either event The Transition Timeline is now available to order here, or can be secured at the special price of £10 from me in person. I will post again soon with more details of the book itself, but for now I will leave you with the design for the back and front covers respectively, and some of the endorsements already received. 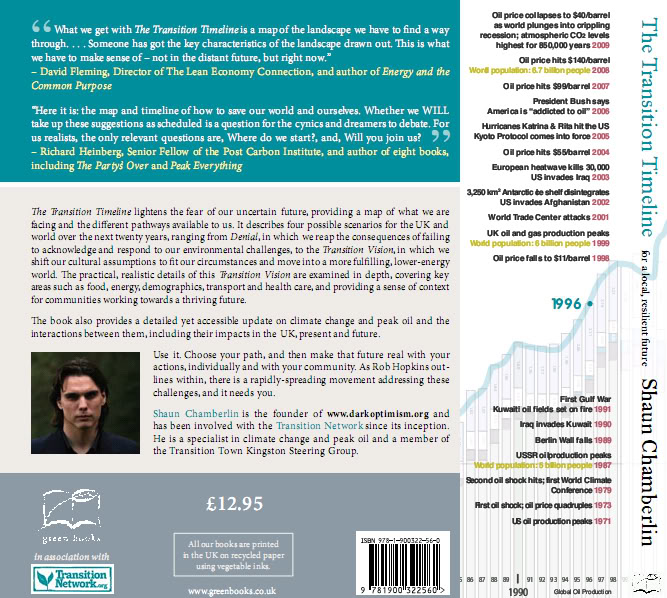 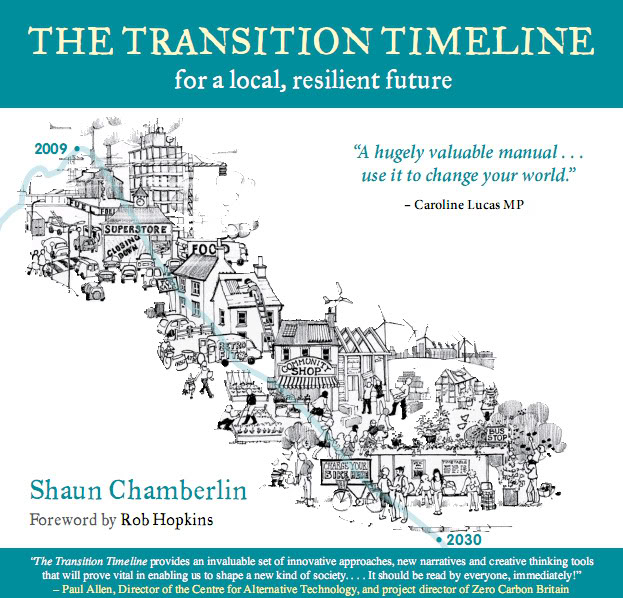 “Peak oil and climate change are two of the greatest challenges we face today; the Transition Town movement is firmly rooted in the idea that people taking action now in their communities can not only tackle these environmental threats but also, in the process of doing so, lead more fulfilling lives. It is about hope in an otherwise bleak seeming future. Above all, it's about the power of an alternative vision for how society could be and not waiting for government or politicians to get it right. The Transition Timeline is designed to bring that vision to life – with stories of what communities have already achieved, with updates on the latest scientific data, and with ‘maps’ that highlight key landmarks on the journey towards a zero carbon future. It's a hugely valuable manual for anyone committed to turning dreams into reality. Don't just read this book – use it to change your world.” ~ Caroline Lucas MEP, leader of the Green Party of England and Wales, and co-author of Green Alternatives to Globalisation: A Manifesto. -- “Shaun Chamberlin ties down the uncertainties about climate, energy, food, water and population, the big scene-setters of our future, with no-nonsense authority. What we get with The Transition Timeline is a map of the landscape we have to find a way through. Map-making is a risky business: sooner or later someone is going to use your map and come across a treacherous swamp that isn’t marked. So you need to be alert to revisions and reports from travellers. But what matters is that someone has got the key characteristics of the landscape drawn out. This is what we have to make sense of – not in the distant future, but right now. Don't set out without The Transition Timeline. Take a biro. Scribble updates, comments, expressions of shock and horror, notes to cheer yourself up. By the time your copy has been rained on, stained with blackberry juice, consulted, annotated, used to press and preserve a leaf of our autumnal world, you will have a good idea of where you are, and inspiration about where you are going. It is almost as good as getting there.” ~ Dr. David Fleming, director of The Lean Economy Connection, and author of Energy and the Common Purpose -- “There is obviously no single, magic bullet solution to climate change. But if I was forced to choose one – our best hope of averting the crisis – it would definitely be Transition Towns.” ~ Franny Armstrong, Director of The Age of Stupid film -- “Transition has emerged as perhaps the only real model we have for addressing our current crisis – a new, if vital, format for reconsidering our future. The Transition Timeline strengthens a fragile form, something that might, without a trace of irony, be called one of the last, best hopes for all of us.” ~ Sharon Astyk, author of Depletion and Abundance: Life on the New Home Front and A Nation of Farmers: Defeating the Food Crisis on American Soil -- “Will the future be as rosy as The Transition Timeline suggests it might be? Will the people of Britain and the rest of the world begin immediately to make better decisions, taking the welfare of future generations into account? The answer to both questions is probably no. Will serious repercussions of decisions already taken (regarding fossil fuel consumption and the structuring of our economy to depend on perpetual growth for its viability) come to bite us hard before we even have a chance to implement some of the excellent recommendations contained in this book? The answer to that one is certainly yes - we are already seeing dire consequences of past economic and energy decisions. Nevertheless, without a vision of what can be, there is no alternative to a future completely constrained by the past. The ideal future set forth herein is not a useless pipe-dream. There is not a single outcome described in this book that could not realistically be achieved IF we all do things beginning now that are entirely within our ability to do. So here it is: the map and timeline of how to save our world and ourselves. Whether we WILL take up these suggestions as scheduled is a question for the cynics and dreamers to debate. For us realists, the only relevant questions are, Where do we start?, and, Will you join us? ” ~ Richard Heinberg, Senior fellow of the Post Carbon Institute, and author of eight books, including The Party’s Over and Peak Everything -- “The next 100 months will be a very special time for humanity. On numerous fronts, the consequences of the past 150 years of industrialisation are all simultaneously coming home to roost. Even senior experts, scientists, NGOs and political leaders fail to appreciate that the most recent evidence reveals a situation more urgent than had been expected, even by those who have been following it closely for decades. The Transition Timeline provides an invaluable set of innovative approaches, new narratives and creative thinking tools that will prove vital in enabling us to shape a new kind of society and a new kind of economy; stable in the long term, locally resilient, but still active in a global context, rich in quality jobs, a strong sense of purpose and reliant on indigenous, in-exhaustible energy. It should be read by everyone, immediately!” ~ Paul Allen, director of the Centre for Alternative Technology, and project director of Zero Carbon Britain