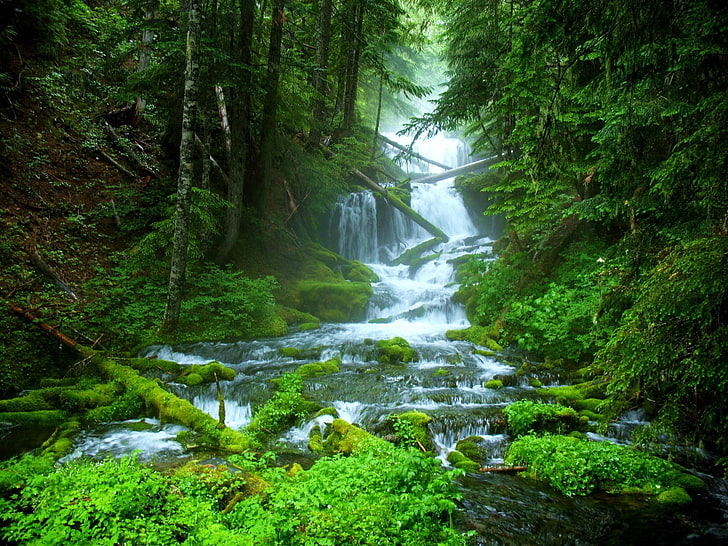 In the climate policy community there is a growing debate between advocates of 'upstream' and 'downstream' carbon caps (dams?). The terms draw an analogy between the flow of water in a stream and the flow of energy through an economy. 'Upstream' advocates want to regulate the few dozen fuel and energy companies that bring carbon into the economy, arguing that this is cheaper and simpler than addressing the behaviour of tens of millions of 'downstream' consumers. At first glance this seems a convincing argument, but there is one important regard in which an upstream scheme fails - it does not engage the general populace in the changes required. While this might seem a benefit in terms of simplicity it means that the fundamental changes required in society are simply not going to happen. Energy suppliers alone are not going to be able to resolve climate change. We need every citizen to see the need to change the way we live, work and play. There are a great number of suggested schemes, but two are perhaps the best thought-through and can help us to explore this debate.

Representing the downstream camp is Tradable Energy Quotas - TEQs (AKA Domestic Tradable Quotas - DTQs). This is an energy rationing scheme designed to cover the whole economies of individual nations, requiring energy users to secure allowances in order to purchase fuels and electricity. These allowances are given free-of-charge to individuals but all other organisations in the economy have to buy them. The number of allowances issued is limited in line with the national carbon cap. It would operate underneath an international framework such as Contraction and Convergence which would set the various national caps, ensuring that global emissions fall.

In the upstream corner is Cap and Dividend (AKA Sky Trust). This is a system which sets a global cap on carbon emissions, and then auctions a number of allowances determined by the global cap to fossil fuel producers, who must have them in order to be allowed to extract fossil fuels. The revenue generated by the auction is then distributed to every person in the world on an equal basis - this is the 'dividend'. Both schemes aim to provide a means to implement the global cap on emissions necessitated by the severity of our climate emergency, and both schemes allow for trading of allowances/permits once they have been issued. Cap and Dividend would clearly be simpler and cheaper to introduce, however, as it only involves interactions with a small number of companies worldwide, followed by a relatively straightforward financial payment to the people of the world. On the other hand TEQs would provide greater public engagement and opportunities for behaviour change. This inverse relationship between financial savings and public engagement is as we might expect. But clearly effectiveness in addressing the combined challenge of climate change and energy resource depletion is the most important criterion for evaluating such schemes. If we can achieve that more cheaply and easily then all well and good, but as Dr. Richard Gammon put it to Congress in 1999, “If you think mitigated climate change is expensive, try unmitigated climate change”. Effectiveness is far and away the critical concern for many reasons, but ultimately an ineffective scheme will cost us a lot more than an effective one anyway. Cap and Dividend advocates argue that implementing a cap guarantees effectiveness, thus leaving cost the defining factor in the decision. But this ignores the true nature of the problem we face, which is not just an abstract exercise in administering carbon caps. In reality the speed of energy descent required by our societies in order to avoid catastrophic climate change is extremely demanding, especially in the context of energy resource depletion. Achieving the necessary changes in our energy infrastructure and in our lifestyles in the timescale available presents possibly the greatest challenge humanity has yet faced. 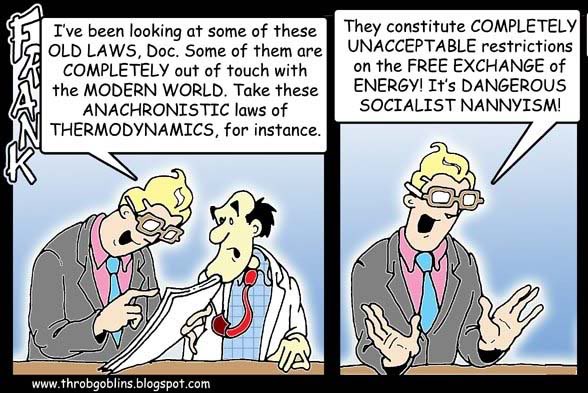 This is why a number of Government and industry papers have suggested that there should be a 'soft cap', with a 'safety valve' in case living within the cap proves too challenging. However, undermining the cap in this way is clearly inappropriate to a situation where we are facing the possibility of permanently destabilising our atmosphere and life-support systems. We need a scheme that helps societies adapt to the constraints of the cap, without causing such strain that there are deafening cries for safety valves or softened caps. We must engage the populace in the necessary transition at the local and individual level, as well as working with the big industrial emitters. As last week’s Environmental Audit Committee report stated, upstream schemes, “rely on price signals transmitted down through the economy to deter customers from buying carbon intensive goods or services—with the same downstream effect as a carbon tax. We remain to be convinced that price signals alone, especially when offset by the [additional income from the dividend], would encourage significant behavioural change comparable with that resulting from a carbon allowance. Larry Lohmann, author of the outstanding Carbon Trading: A Critical Conversation on Climate Change, Privatisation and Power, which highlights many of the fundamental shortcomings of existing upstream trading schemes such as the EU ETS, recently commented that, “The problem is that it’s not clear how price can incentivise structural change of the kind required for the climate problem. Historically, price has not been effective in stimulating the kinds of social transformation needed – although it has been effective in stimulating other kinds of change (usually far more marginal). Social and technological change of the kind at issue has come about in other ways.” Now I should stress at this point that Larry Lohmann would not necessarily support TEQs either, and a thorough examination of how TEQs relates to the criticisms of carbon trading in his report is something I am currently engaged in, prior to discussing the matter with him directly. But having outlined the shortcomings of Cap and Dividend in trying to address energy resource depletion and climate change purely via the price signal, I should outline how TEQs differs in this regard. 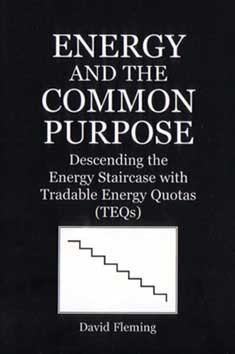 Energy, not money The first key point is that TEQs is denominated in terms of energy, not money. This is because it was designed from the outset to address both energy depletion and climate change. It would guarantee an assured entitlement of fuel and energy to every individual in the country, in a way that C&D does not. Cap and Dividend is designed solely with regard to climate change, and so an additional energy rationing system – like TEQs – would be needed to deal with any oil or gas supply disruptions, which would rather negate the cost savings of such a scheme. Yet even if we were to ignore the realities of energy resource depletion, the shrinking carbon cap is itself going to mean a shrinking supply of energy to the economy. So again we require some form of rationing system lest we are back to 'rationing by price', whereby the poor are simply expected to do without. Small-scale solutions within a large-scale framework The second point is that TEQs - devised by my colleague Dr. David Fleming - is explicitly a national scheme, not a global one. In my humble opinion, the most brilliant thing ever to pass David's lips is that, “Large scale problems do not require large-scale solutions – they require small-scale solutions within a large-scale framework.” I find this deeply inspiring, reminding us that schemes like Contraction and Convergence, Cap and Dividend and Tradable Energy Quotas exist only as frameworks to stimulate local action. We are tempted to think of them as solutions in themselves, but we must remember that it is at the local and individual levels where all the real changes take place – that is after all where everyone in the world lives. The correct role of these large-scale frameworks is to support and encourage local responsibility, while providing the assurance that enough action is taking place to address the scale of our global problems. And this is why TEQs is defined strictly as a national scheme – because collective motivation is necessary on a scale in which individual effort is seen as being significant. It does not work on a scale so large that individuals lose the sense of belonging, or the belief that their individual contributions make a difference. Common Purpose The third key point is that ‘upstream’ regulation like Cap and Dividend only involves the fossil fuel companies. While this might seem a benefit in terms of simplicity it means that the fundamental changes required in society are not going to happen – while it is perhaps fashionable to hold them responsible for every aspect of our energy and climate problems, in reality our individual and community lifestyles need transformation too. And perhaps even more crucially, to achieve the dramatic change in infrastructures necessitated by climate change we need cooperation between the different sectors of society, united in a single simple scheme. It is a critical feature of TEQs that it is designed to stimulate and enable constructive interaction both between households and between households and all other users – companies, local authorities, transport providers and national government. In short, the scheme is explicitly designed to stimulate common purpose in a nation. The fixed quantity of energy available under TEQs makes it obvious that high consumption by one person leaves less for everyone else. Lower demand means lower prices, so it becomes in the collective interest that the price of TEQs allowances should be low. There is an incentive to collaborate to make it happen, and TEQs thus generates a social and economic culture that is intelligently, effectively and collectively working towards the shared goal of living happily within our energy and emissions constraints. Cap and Dividend, unfortunately, might have the opposite effect. While it incentivises individuals to reduce their personal energy use, it also appears to incentivise them to encourage increased energy use in the world as a whole, as by doing so they push up the demand for emissions permits, and so increase the dividend they receive. Such a perverse incentive is entirely at odds with the required common purpose. To sum up then, the key argument in favour of upstream schemes is that they would be cheaper and simpler than downstream alternatives (which they would be), but there are good reasons to suspect that they would represent a cheap and ineffective response to both climate change and energy depletion, which would be the greatest of all fool’s economies.