Fee and Dividend or TEQs? In the aftermath of Paris COP21, what *should* effective climate policy look like? 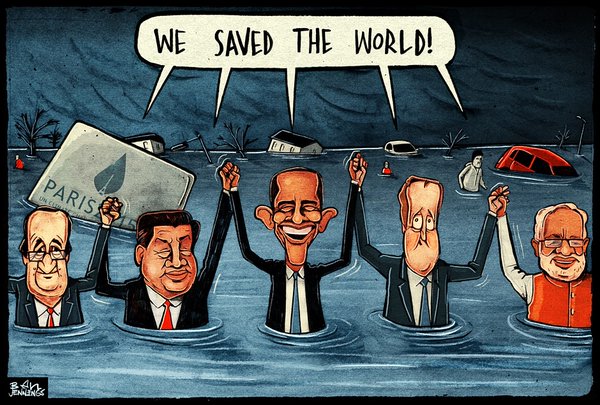 We just sent out our Fleming Policy Centre newsletter, with reflections on the Paris climate summit. Bottom line: it’s not good. In the words of the author Naomi Klein, “Our leaders have shown themselves willing to set our world on fire.”

Meanwhile, the mainstream media seem to be doing their best to put the world to sleep again. One excitable front-page headline I noticed in The Observer proclaimed:

The same article concluded on p9, with a quiet mention that: “there will be no legal obligation for countries to cut emissions”.

In truth, the good news is found elsewhere, with the ever-swelling numbers of ordinary people realising that our future is being destroyed in our name. In the print edition of the paper though, one tiny voice of sanity did sneak in to a sidebox, as climate scientist James Hansen commented on the agreement: “It’s a fraud really, a fake”.

But if we are so dismissive of what global politics is producing, then it is perhaps fair to ask what we wish to see instead. Hansen, a long-time hero of mine, argues for Fee & Dividend – a tax on carbon whose revenue is paid out to the population of the nation implementing it. And the recent peer-reviewed paper that I lead-authored on this topic (now the most read in the history of Carbon Management) instead advocates TEQs – a carbon rationing system with free rations for the population of the nation implementing it.

Jim and I have in fact been discussing these alternatives via very occasional emails since I first wrote to him on it in 2008 (and Citizen’s Climate Lobby UK opened the same discussion on Facebook earlier this year), but it feels the right time to broaden out the conversation.

So, below are the similarities and differences between the two approaches, for your delectation and deliberation. I will again be sending the link to Hansen and the Citizen’s Climate Lobby for comments, and may edit it based on comments received, especially if any inaccuracies come to light.

So how are they similar?

Let’s start with why both TEQs and F&D are excellent ideas that would represent a radical break from the status quo.

Both are ways of ensuring that society finally gets serious about addressing our climate challenge, neither is open to the extensive corporate windfalls that characterise existing ‘Cap and Trade’ schemes (which have no effective cap, and thus are really just ‘Trade’ schemes), and both look to protect the poorest in society as energy prices rise to take account of the impact of the carbon therein (although I have a concern that dividends – delivered after energy purchases – may come too late for folk priced out of the fuel they need. TEQs, by contrast, delivers entitlements to energy up front, ahead of time).

Both are also grassroots alternatives to the UN process of which the Paris COP21 summit is the latest expression. Instead of seeking global agreement on a global deal, both TEQs and F&D allow adoption by individual countries or groups of countries. Any countries doing so will necessarily introduce import tariffs alongside, to ensure that their manufacturers are not disadvantaged relative to international competitors (discussed here). And since these tariffs will generate revenue for the ‘adopter countries’ when they import goods, this will in turn provide a strong incentive for the exporting countries to themselves implement similar policies, so that they can collect this revenue, instead of letting it flow overseas. In this way, effective climate policy could spread around the world, without the necessity for the apparent impossibility of global agreement.

Importantly though, both are also vulnerable to a lack of political ambition. Both require adoption at government level, and thus require defence against being corrupted and compromised by lobbying interests as they move towards implementation. And if F&D was adopted with too low a carbon price, or TEQs was adopted with too high an emissions cap, either could provide merely a useful means to inadequate ends.

And what are the essential differences?

Price-based policy frameworks (e.g. F&D) act to raise the price of carbon-rich purchases in the belief/hope that consequent emissions reductions will be sufficient to avoid climate catastrophe, while quantity-based frameworks (e.g. TEQs) act to place a cap on emissions in the belief/hope that the price rises this is likely to cause will not cause economic catastrophe.

The second difference is between ‘upstream’ and ‘downstream’ approaches. These widely-used terms draw an analogy between the flow of water in a stream and the flow of energy/carbon through an economy.

‘Upstream’ advocates (e.g. F&D) want to regulate the few dozen fuel and energy companies that bring carbon into the economy, arguing that this is cheaper and simpler than addressing the behaviour of tens of millions of ‘downstream’ consumers. ‘Downstream’ advocates argue that such engagement with the general populace is essential if we are to meet the climate challenge, with TEQs providing a way to deliver that without the need for downstream monitoring. 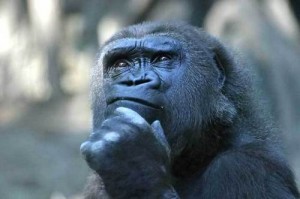 It is undoubtedly true that current politics favours the price-based and upstream approaches, which present far less of a challenge to today’s dominant thinking. Certainly in the U.S. political context, Jim Hansen has argued that TEQs are just too radical an option for the American public to swallow. I am not an expert on the U.S. political scene, so he may well be right.

However, I do worry that a more radical shift in society *is* needed here. There is a rift between political reality and scientific reality, and they must be reconciled. To my mind, upstream price signals are not going to be enough, though a scheme like F&D would certainly be a step closer to sanity than current policy. To really achieve the change required, we will need TEQs.

And since I believe that the economy is fully dependent on a functioning ecology, for me a hard cap on emissions must be primary, and the price of goods and services has to be secondary, which is why I favour a quantity-based approach. I also don’t believe a long-term emissions trajectory can be set effectively through a tax/fee alone.

I do think that Fee & Dividend would be far cheaper and more effective than current carbon policy, but while upstream frameworks are clearly cheaper (and politically easier) to implement, I believe that this is partly because they don’t bring about the fundamental changes that are needed in society. Of course it is more straightforward to pass laws that only affect energy suppliers, but Big Energy Companies alone are not going to be able to resolve climate change, even if they wholeheartedly wanted to. They supply what we demand, and this challenge requires that we all engage with the need to change the way we live, work and play.

TEQs, accordingly, is built on the latest work in social psychology, and provides visibility to the intrinsic incentives that exist for businesses, government, communities and individuals to collaborate in working towards the shared long-term desires to retain both a benign climate and secure access to essential energy services.

Upstream schemes can only provide an extrinsic (price) signal to encourage low-carbon behaviour. In the words of the UK Environmental Audit Committee (the UK government’s oversight body on the environment):

“We remain to be convinced that price signals alone, especially when offset by the [additional income from the dividend], would encourage significant behavioural change comparable with that resulting from a carbon allowance … A meaningful reduction in emissions will only be achieved, and maintained, with significant and urgent behavioural change.”

In summary then, in addition to their shared benefits, I see the relative advantages of the two schemes as:

Fee & Dividend: Cheaper and faster to implement; less challenging to politics/markets; carbon price set by the Department of Energy.

TEQs: Deeper engagement with the whole population based on principles drawn from social psychology; consistent, cohesive integration of a long-term perspective; stimulation of cross-sector collaboration in reducing emissions; a carbon cap set in accordance with climate science.

As ever, it comes down to that rift between scientific reality and political reality. To my eyes, Fee & Dividend represents the less challenging political path to policy change, and that is certainly attractive. However, while it is tempting to think of adoption of a carbon fee or cap as a solution in itself, the true political challenge is quickly getting and keeping the fee high enough (or cap low enough) to avoid destabilising our climate. Which in turn means the transformation of our society so that it can thrive within such a limit. Without such a fundamental transition to low-carbon living, society (and particularly the poorest) will hurt badly as any effective policy makes high-carbon energy less accessible. Such suffering is both inherently distressing and likely to lead to irresistible political pressure to loosen or abandon any such policy.

Why then does that point me towards TEQs? Well, the full arguments and evidence are set out in the peer-reviewed paper I recently lead-authored. I believe it’s worth a look – it has proved popular, perhaps due to the extensive efforts I made to keep it more readable than academia usually manages! But in short, I believe that TEQs is far better placed to support and facilitate the depth of decarbonisation required – and thus defend its long-term political feasibility – than an increase in the price of carbon ever could.

This is because it has been shown to be more popular with the public (due to its fairness and effectiveness); because it most effectively protects the most vulnerable; because it destroys at a stroke the impossible political tension between needing to keep energy prices low and carbon prices high; and because it does not treat all emissions as equal (in recognition that while some are within people’s discretion, others are not, and that these decisions should be left with the people in question), nor require the inherently uncertain and faintly absurd estimation of an ‘appropriate carbon price’.

Of course, with the current direction of politics, the catastrophic destabilisation of our climate looks far more likely than either alternative, but if we are to fight, it is important that we clearly identify the alternative course or courses worth fighting for. Finally, for those who prefer a more visual layout, here is a quick comparison table (also including the existing EU Emissions Trading Scheme), with thanks to Nicola Terry for the idea and initial work: 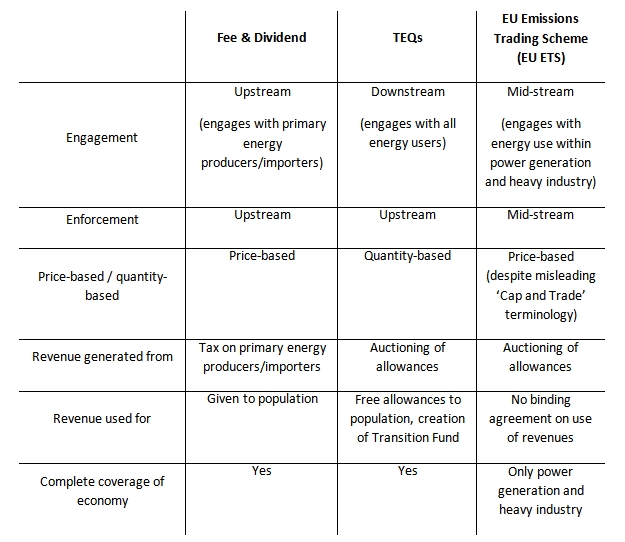 I look forward to hearing what you think, in the comments below.
—
Long-time readers may note some similarities with this 2008 post on TEQs and Cap and Dividend (an older variant – a quantity-based, upstream system), or my summer piece on the dangers of carbon pricing.

I do believe that carbon pricing is an inherently flawed approach, and that the World Bank/IMF/Big Oil’s reasons for pushing it are not what they pretend – see this brilliantly straightforward explanation on that – but nonetheless, Fee & Dividend is certainly worthy of respect and discussion as the gold standard representative of that path.