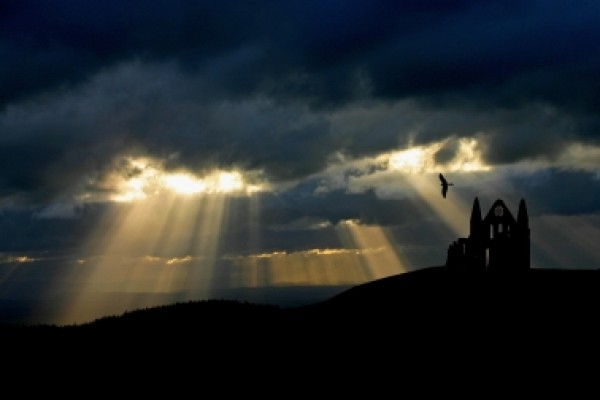 This is an excerpt from a longer video interview Rhonda Fabian conducted with Shaun Chamberlin at the opening of the New Story Summit in Findhorn, Scotland. Part of a Findhorn Foundation documentary initiative.

Rhonda Fabian: Shaun, please tell me what Dark Optimism means to you.

Dark Optimism is a widely misunderstood term. I get a lot of people coming up to me saying, “Are you feeling dark today, or optimistic?” That’s not quite what I mean. Dark Optimism means being unashamedly positive about the kind of world we could create, but unashamedly realistic about how far we are from doing that right now.

So it’s not that sort of bright shiny optimism, which I can find quite frustrating. It’s more like, “Well everything isn’t fine actually”, you know? It’s an ability to look at the more difficult aspects of where we are and what we’re doing, whilst also retaining a sort of deep faith in human potential. And also drawing on the deeper questions of why we’re really here. And does the state of the world in any way challenge our purpose in being here, or make that impossible? I don’t think it does.


Even if we are into a world of unstoppable, runaway climate change, for example. There’s still love to do, there’s still positive change to make in the world.

Fabian: How does it compare with the Dark Mountain movement?

Well, obviously they stole my darkness! (laughs) Actually, their name comes from a Robinson Jeffers poem. But Dark Mountain plays an incredibly important part enabling us to ask the questions that we’re often not allowed to ask. You know, maybe it is all too late. And if it is, what does that mean?

There’s a logical flaw at the heart of a lot of arguments that we make in “the movement” – whichever movement label you want to put on it – which is that we tend to look at things and say, “Well that won’t work, so we need this.” An example might be people saying, “Well renewable energy can’t ramp up fast enough to solve our energy crisis, so we need nuclear.” Or, “The mainstream parties aren’t going to give us what we need, so we need the Green Party.” Or to not vote…or whatever. The premise isn’t the conclusion – they don’t join up! You might just as well say, “Renewable energy can’t ramp up fast enough to deal with our energy crisis, so we need sardines.” You’ve not said anything about the alternative. You’ve just said, “This doesn’t work, so that.”

And I think Dark Mountain addresses that to an extent. The argument we hear again and again in environmentalism is, “Should we be working for radical change, or should we be working within the existing paradigms?” So, people will say, “Well, you know, we don’t have time to wait for a revolution. Everything has to happen now, so we’ve got to work within the existing paradigms.” And then other people say, “Well, you know, if we don’t have a radical, fundamental revolution, then what’s the point, because we’re just addressing symptoms.” And both of those arguments, I think, are completely valid. Yet, you hear people arguing back and forth and back and forth about this and never finding resolution. They can’t admit that they’re actually both right.

There isn’t time for radical change, AND we need radical change. And so, if you can never accept that actually maybe they’re both right, and that we have to ask some really deeper questions about what that means, then you just end up with people over here having a nice career saying this, and people over there having a nice career saying that. And you never actually get to the deeper truth.

For me, Dark Mountain is a venue where we can ask those kinds of questions. Well, what if this doesn’t work AND that doesn’t work? And what if we don’t actually know of an alternative. Can we sit with that? Can we actually sit with that together? And can we have a conversation about what that means? To me that’s a really potent and fertile space.

Fabian: It says to me that there’s a place for sorrow in optimism?

Yes. Part of my journey over the last few years is that David Fleming, who was my mentor and very close friend passed away very suddenly at the end of 2010. And actually, we were just a few weeks away from launching a big project that we’d co-authored. So it was a very difficult and busy time. To try and hold that – deal with the work and bring it to the fruition we were both hoping for, whilst also trying to process the grief of the sudden loss of my – my good friend. And then just three weeks after he passed, my fiancée passed away very suddenly as well.

That was a profoundly challenging time. And I’m quite happy with how I moved through that. Yet, I don’t think grief is a process that ends. I think it’s a relationship that continues throughout your life. I sort of found over the past few years that when I reflect on and write about my personal grief, there’s a very strong correlation between that and the grief that many of us carry, maybe all of us carry, for the state of the world and the state of nature and the state of our society.

I think grieving, as opposed to loss, is a process of opening ourselves. When we suffer a loss that’s overwhelming, we shut down. Your body just says, “That’s too much”, right? “I’m gonna shut it down.” We shut down part of ourselves and that keeps us from being completely overwhelmed, but it also keeps us from being fully alive.

And so the process of grieving is the process of – of coming back to life. On a societal level, on a collective level, that’s true as well. Part of the reason we fail collectively right now to face up to the kind of damage that we’re doing in the world, is because the grief of it is so overwhelming, that the process of opening those doors again is incredibly difficult. Because behind them is a huge, overwhelming bunch of pain. So every time you open one of them again, there it is waiting for you.

And so you have to have the space to do that – to work through that pain. And it’s only by doing that that you come back to life and you start to be able to respond to these problems in a way that is more open, to look at it all in the round and say, “Okay. What is the most appropriate way of acting here?” Rather than, “Oh god, I can’t look at that. I’m just gonna keep my head down and work really hard at this thing, because I can’t look at the bigger questions.” Because the grief is still there.

Fabian: So if grief is a process, what about despair?

Well there’s a really interesting thing about despair, I think. It has a spark in it of deep motivation. I think despair can be described as looking at every possible scenario and seeing no hopeful one. But what that means is, if you can present someone in despair with one scenario that looks hopeful – that looks like a real possibility – then there’s this immense wealth of motivation to drive toward it, because despair is not a nice place to be.

If you can actually present someone with a possibility, even if it’s just a narrow possibility, then despair becomes this huge driver, this huge motivation that can achieve incredible things.

Fabian: Is this despair at the heart of Dark Optimism? Does that drive your activism?

For me, becoming whatever I am, whether that’s an activist, or whatever, was about selfishness really. It was about the perspective I hold that in a very real and important sense – we’re all one. And our well-being is completely interdependent.

From that sort of spiritual perspective, the suffering of others and the suffering of the world is my suffering. Consequently, you know, sitting on the sofa, watching TV, selfishly consuming, wasn’t very selfish because it – it didn’t satisfy me. It left me with this – this sort of pain about what was happening. And it was really uncomfortable for me as an individual.

And the only thing that could make me more comfortable, was to feel like I was facing up to these challenges, trying to engage with them in some impactful, positive way. That was the only way I as an individual could feel happier, more content, and more whole. And so, yes, that process of opening to the pain that we feel at the state of the world; the anger, or dissatisfaction, or sense of injustice, or whatever it might be that we feel when we look at how things are;

if we don’t try and face what we feel, and hear the call that it might give to us, then we’re shutting ourselves down. Then we’re becoming less alive.

The one piece of advice I would give to young people is to remember that you cannot NOT change the world. Whatever you do will change the world. If you take the most default option, you follow the most mainstream, down the line, ‘just keep your head down and get on with what they’re telling you to do’, approach, then that’s the world that you’re helping to create. There is no way that you can not change the world.

And so open yourself to everything that you feel about the state of the world. Don’t let anyone tell you what to do. But just ask yourself, “How do I want to respond to this in a way that isn’t shutting me down; that is opening me up; that is helping me be fully who I am.” And that will lead you for the rest of your life.

—
This is an excerpt from a longer video interview conducted on the 27th September 2014, at the beginning of the New Story Summit in Findhorn, Scotland.