OccupyTransition, or ‘this Halloween I dressed as the economy’ 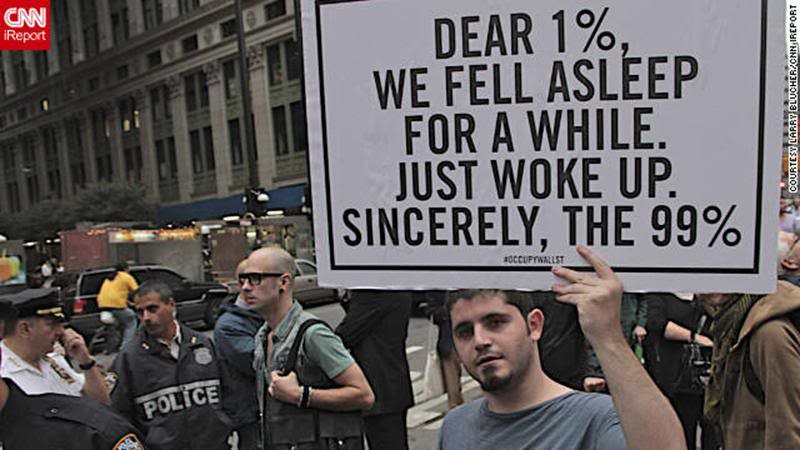 This post was written for the Transition Network‘s Social Reporting project, and published there on Sunday 13th November.

Having been invited to be this week’s Social Reporting guest editor and introduce the theme of economics, the burgeoning ‘Occupy’ movement seemed the obvious place to start.

Over the last couple of months I have been fascinated as the occupations started with OccupyWallStreet on Sept 17th, followed by others joining in solidarity around the world, including OccupyLondon, which has been the London Stock Exchange’s new neighbour since Oct 15th.

I’ve not been well lately, so haven’t been able to be there as much as I’d like, but I have been following events closely online and visiting when I can. It has been interesting to note that most of those I have met at OccupyLondon hadn’t previously heard of Transition, and that got me thinking about the parallels and differences between the two movements…

So what is ‘Occupy’ all about? A lot has been made in the mainstream media about the elusive “one demand” that Adbusters referred to in the original image that sparked the movement, and the ensuing lack of a single clear demand to fulfil that call. 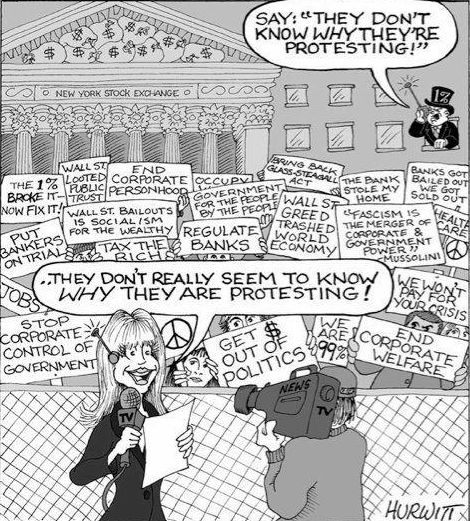 And yet the basic point comes through loud and clear. Our economic system is profoundly unfair, and we want profound change. We live under a system in which banks receive more in subsidies than they pay in taxes, where they use their power to actually create money out of thin air, where they receive hundreds of billions in bailouts, and where the graph of global income distribution looks, well, like this:

It is easy to see why ‘the 99%’ might have something to say to ‘the 1%’ (the spike on the right should actually continue upwards over ten thousand times as far as shown here, or more than a kilometre above your computer!), and it also easy for us to let our brains boggle at numbers in the hundreds of billions of pounds. What can such numbers really mean? Yet Occupy has learned the hard way that they can become terribly real when we see some of the things that this virtually unlimited money is used for.

For example, the New York Police Department, which has been increasingly violent in its treatment of OccupyWallSt, was given a $4.6m donation by bailed-out Wall Street megabank JP Morgan Chase, and the New York Stock Exchange and Wall Street corporations apparently now actually hire individual serving policemen for $37/hr. Such riches also permit the big financial institutions to appear generous by becoming the chief sponsors of organisations like St. Paul’s Cathedral. Not to mention of course that more than 99% of us work for money, which is apparently being magicked out of thin air by others, who then use this free resource to pay the rest of us to do whatever they see fit.

It suddenly becomes crystal clear why the Oakland public were chanting “who are you protecting?” as the Oakland police force closed in to attack them for being in the streets of Oakland, threatening the use of “chemical agents” via a megaphone and throwing a flash grenade at those trying to help a wounded man:

Witnesses (AKA social reporters!) claim that one protester actually threw dollar bills at the police line while shouting “will you protect us now?” Incidentally, on the same day, on this side of the pond, Sky News were busy telling Occupy London campers that “what you’re doing is imposing your will on everybody else in a similar way (to the Nazis)”. Hm. Reasons abound for us to do our own reporting!

Now, at first glance, all this confrontation might seem a world away from working diligently to improve the resilience of our local communities, but I believe that the links are strong, and I hope to see them grow even stronger. Let me explain why.

Both Transition and Occupy are founded on a belief that the current economic system is leading us to a future that none of us desire and, although peak oil seems to be a new term to many of those at OccupyLondon, we also share a strong strand of concern over climate change.

The big question for OccupyLondon though is what next? Substantial public support has helped resist the attempts of the Church of England and Corporation of London to have them moved on, and with St. Paul’s having conceded that the camp presents no reason for the Cathedral to close its doors, Occupy London has established a site, at least for now. But what to do with it? 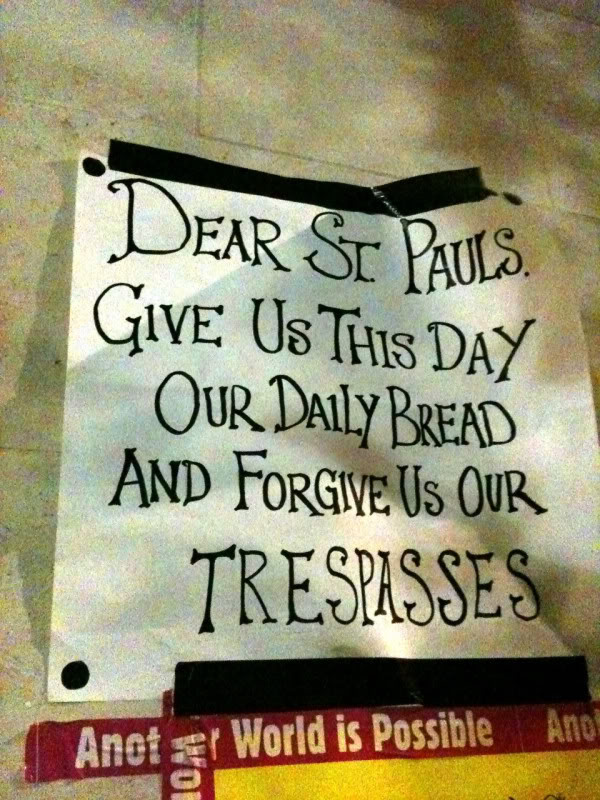 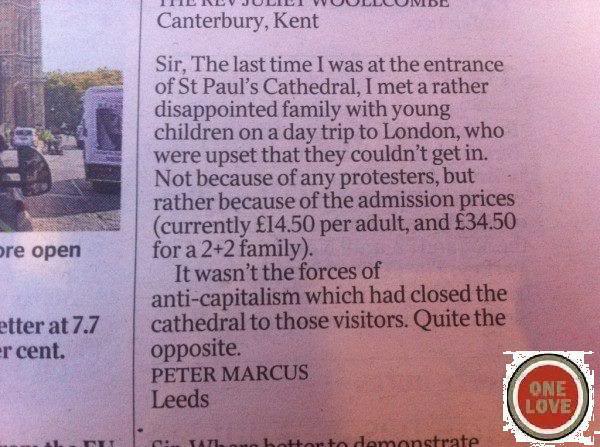 The mainstream media have been clamouring for a list of demands, yet I and many others find it refreshing that none has yet been forthcoming.

I fear that setting demands is tantamount to saying “give us this much and then we will go home and allow the destruction that is business as usual to continue”. For example, there is growing momentum behind calls for Occupy to demand a ‘Robin Hood tax’. Yet as banks can and do create money it seems that demanding a fraction back might amount to selling ourselves for nothing.

“There is always an easy solution to every human problem — neat, plausible, and wrong” ~ H. L. Mencken

Given the mess things are in, it seems absurd to expect a simple set of demands that could put it all right. Instead, OccupyLondon has as yet adopted what seems to me a far more mature approach – setting up teach-ins and a ‘university’ in which we can educate ourselves, and then giving the resultant discussions as long as they need. It says to the guardians of the status quo “Ok, no, we don’t have all the answers, but it’s abundantly clear that you don’t either, so let’s talk it over.”

And it’s here where I fancy Transitioners might have a few things to say (as well as much to learn!) with our growing experience of building local economic networks that make a lot more sense than this globalised mess:

The first thing that I think Transitioners can usefully contribute to the discussions is an awareness of the energy limits that we are facing, and what they mean for the possibility of continued economic growth (even leaving aside the question of its desirability). If Occupy became just a mass demand for the politicians to roll back the cuts and rescue those who have been abandoned, it might be set to fail, because the era of increasing energy abundance is over, whatever politicians might say or do.

On the other hand, if Occupy recognises the inherent problem of protesting against the system your lifestyle depends upon, then the conversation goes to a much more interesting place – can we build alternative, independent systems to support us, even in a period of energy descent? This is where Transition’s five years of experience might be most helpful.

As Sharon Astyk put it:

So on that note, I hand over to the social reporters to explore this week’s topic of Transition economics. From local e-currencies to the gift economy – what can we bring to the discussion that is sweeping the world? 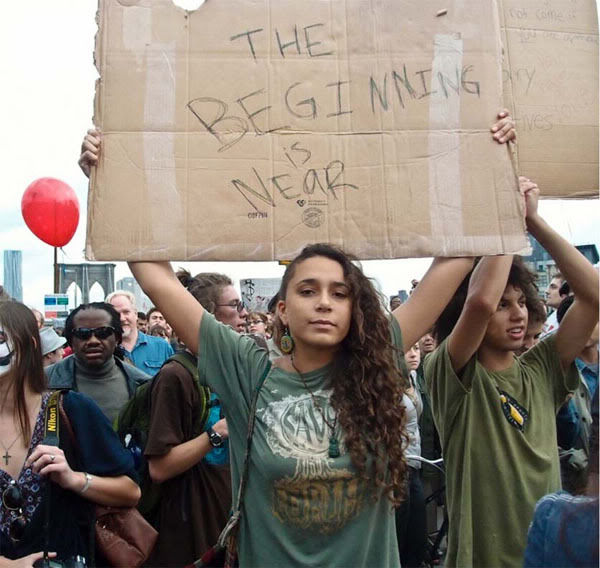 Blogs posted in response by other Transitioners:

Edit – On Nov 9, Rob Hopkins and I did a joint presentation on Transition at OccupyLondon. Rob’s report, including an interview with me, can be found here. 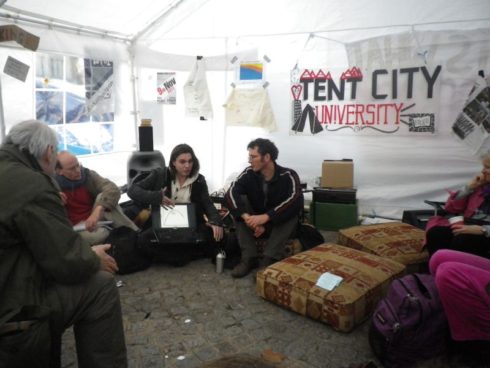