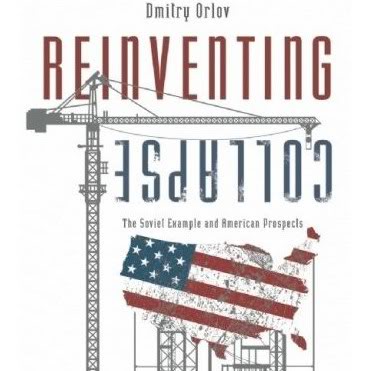 As George Carlin once said, “they call it the American dream because you have to be asleep to believe in it”.

At the risk of this blog becoming ‘review corner’, that seems the perfect introduction to the book I just finished reading – Dmitry Orlov’s brilliantly enjoyable Reinventing Collapse. This is a true work of dark optimism, with a fair dash of dark humour to boot.

In it, Orlov draws on his experiences of the collapse of the Soviet Union to explore the future American residents like him are likely to face as the effects of the USA’s disastrous economic, energy and foreign policies take hold.

Orlov highlights that economic collapse is not, in fact, the unthinkable end of the world, but rather simply a new set of historical circumstances within which to exist. This is a critically important and inherently dark subject, yet the book is suffused with subtle humour, to the extent that at times you are not quite sure when Orlov is serious and when he’s joking. The answer, invariably, is both.

This deep humour is an apt way to stimulate further thought in the reader, and after the initial laughter I regularly found myself drawn into a contemplation that led me to Orlov’s insights laying beneath.

One subtext particularly intrigued me. While Orlov argues that the collapse of the US economy is inevitable (I would agree), and will surely be extremely difficult for most of those living through it, various asides implied to me that it could be considered in some respects desirable.

This interests me in the context of the desperate urgency of the global climate change situation. As Dr. James Hansen chillingly put it in his recent paper, it is simply becoming a question of whether “humanity wishes to preserve a planet similar to that on which civilization developed and to which life on Earth is adapted”. On his reading of the science (and I trust him) we now have less than seven years to decide.

Bearing these stakes in mind, it is interesting to note that Chris Vernon of The Oil Drum quotes the statistic that Russia’s carbon emissions fell 31% in the 5 years from the end of the Soviet Union in 1991. Ignoring for a moment all the other effects of that economic collapse, and considering that the weight of evidence tends to suggest that a ‘great turning’ of the global paradigm may not be likely to take place in time, I am led to ponder whether economic collapse is actually what we should be hoping for – does it represent our best bet for reducing emissions sufficiently quickly to retain a habitable climate on our planet? 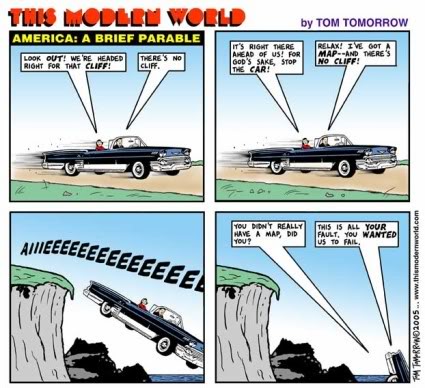 I have written before about my belief that while climate change and peak oil represent the greatest direct threat facing humanity today, they are really only symptoms of a deeper problem. Humanity’s obsession with growth means that if we could wish away the excess CO2 in our atmosphere and generate unlimited oil we would still quickly find our unsustainable way of life pressing up against the next environmental limit, be it food shortages, air pollution, species extinctions or whatever.

And in turn this growth obsession is a symptom of the underlying cultural stories and philosophies we use to make sense of our lives and find meaning. Our cultural stories define us and strongly impact our behaviours. An example of a dominant story in our present culture is that of “progress” – the story that we currently live in one of the most advanced civilisations the world has ever known, and that we are advancing further and faster all the time. The definition of ‘advancement’ is vague – though tied in with concepts like scientific and technological progress – but the story is powerfully held. And if we hold to this cultural story then ‘business as usual’ is an attractive prospect – a continuation of this astonishing advancement. Similarly the cultural story that “fundamental change is impossible” makes it seem inevitable.

The problem with stories comes when they shape our thinking in ways that do not reflect reality. The evidence might support the view that this ‘advanced’ culture is not making us happy and is rapidly destroying our environment’s ability to support us, it might show that dramatic change is both common and inevitable, but dominant cultural stories are powerful magics, and those who challenge them tend to meet resistance and even ridicule.

Nonetheless, my work now focuses on changing these dominant cultural stories – and thus changing our patterns of thought and behaviour – as I see this as the key to equipping our society to deal with the pressing challenges of climate change and peak oil. TEQs, the Transition movement and the various other initiatives listed on my links page (as well as this blog of course!) seem to me to provide the best possibilities for starting to shift our cultural paradigm.

But perhaps this effort is too little too late? And perhaps by trying to move our society a little closer to long-term sustainability we are in fact just prolonging its existence, and thus prolonging its ability to pump emissions into our atmosphere… 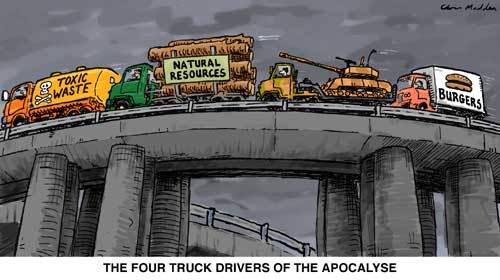 Does our need for a relatively benign climate logically dictate that we should be striving to bring about economic collapse sooner rather than later?

It is an interesting question, and one that we may need to revisit, but my answer is still no. The human suffering caused by such a sudden collapse is overwhelming, and I believe that kinder options are still open to us.

Personally, I believe we still have a chance. I still believe, firstly, that a long-term future for humanity is possible, and secondly that we have a shot at developing a society that responds in a humane way to the crises we face. And I will fight for that possibility for as long as I believe in it and still see a chance that it exists, even as the window of possibility continues to shrink.

When it comes down to it, at the deepest level it doesn’t really matter to me whether or not it is probable that we succeed. As Tom Atlee has written,

“Probabilities are abstractions. Possibilities are the stuff of life, visions to act upon, doors to walk through.”

I will walk through the doors that inspire me.

Of course, there is a side of me that asks “but what if we do reach a time when the evidence is clear – when there is no longer any chance of avoiding the devastation of our climate”. If we were on the Titanic and we had already hit the iceberg there would be little point in trying to patch the hole as the waters raged in – so what then?

Well, the trite answer would be that there’s quite enough to worry about now without concerning myself with that. The more interesting answer comes back to what we believe life is fundamentally about, but that will have to wait for a future post.

Oh, and just what does Dmitry Orlov suggest in terms of personally adapting to an economic collapse? Well, you’ll have to read his book for that!