Carbon Offsetting, what’s it really about?

Off the back of taking part in CheatNeutral’s spoof chat show ‘Going Neutral’ at the Science Museum, this feels like the perfect time to take a look at the concept of carbon offsetting, the most recognised example of which is the planting of trees to ‘soak up’ our carbon emissions, thus supposedly making our net impact ‘carbon neutral’…

Now there is no denying that the right trees, growing in the right place, are a truly wondrous thing, with myriad benefits for local people and wildlife, and for the global climate. Indeed, I am a long-term supporter of organisations like Tree Aid and Trees for Cities, which have long been carefully planting trees where they are most appropriate.

Yet neither these charities nor I claim that my donations give me any kind of right to emit more carbon (or to make fewer efforts to emit less). I donate for the traditional reason – simply because I believe it contributes to creating the kind of world we all want to live in. I might donate to Amnesty for the same reason, but would any of us claim that in doing so I earn the right to perform a small amount of torture?

And why would we choose to send our money to them ($705m last year, worldwide), rather than to the charities mentioned above? Because we have a reason to believe that they will do more good with our money? Or because we believe that they have some kind of moral sanction to cleanse our consciences, with their websites full of soothing words? 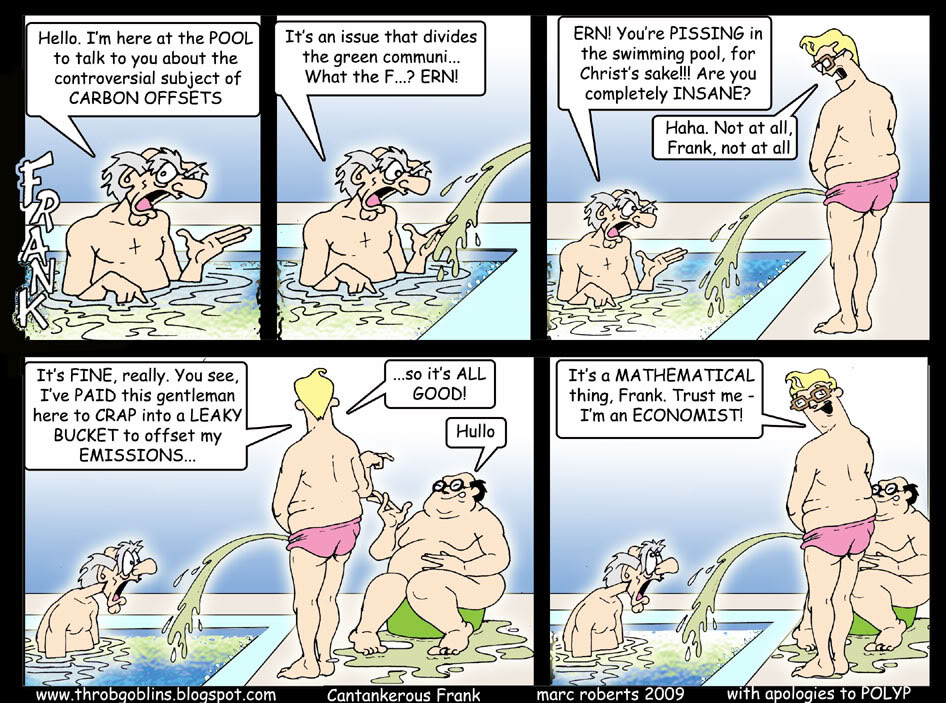 Not to mention the fundamental physical problem with planting trees to offset emissions. Carbon in nature moves through what is known as the active carbon cycle, cycling between the atmosphere, oceans and biosphere as air and water meet, and as life on Earth breathes, lives and dies. There is also inactive carbon (technically part of a much, much slower cycle), laid down in long-term deposits to which we grant names such as “fossil fuels” or “the white cliffs of Dover”. These are, if you like, Earth’s natural form of carbon sequestration.

So when we extract fossil fuels and burn them, we are moving the inactive carbon they contain into the active carbon cycle. If we then lock it back up in forests or any other aspect of the biosphere, we are not removing it from the active carbon cycle – we are not offsetting the deed done. Carbon sealed in coal or oil would have remained there for many millennia, but trees are not nearly so long-lived, especially in a rapidly-changing climate, and when they die and decay the carbon is released into the atmosphere once more. The difference in timescale is striking – the lifetime of a tree is orders of magnitude shorter than the ‘lifetime’ of a coal or oil field… trying to stabilise our climate with tree planting is like trying to keep sea levels down by drinking more water.

So by all means plant some trees – or, failing that, financially support others in doing so – but give not a moment’s credence to the notion that these actions give you some moral right to ignore your own contribution to the world’s most pressing challenge.

Of course, despite the public perception, proponents of carbon offsetting argue that they have moved on from tree planting, and now concentrate on schemes to build renewable energy infrastructure, fund energy efficiency projects, reduce industrial greenhouse gas emissions etc, thus preventing emissions and avoiding the inconvenient truth about carbon cycles.

But the more insidious problem with all carbon offsetting is that it is the inevitable ‘perfect consumerist solution’ to climate change – “just pay us some money and you can forget about it all and get on with your life”. Inconveniently enough, peak energy and climate change together represent probably the greatest challenge in the history of humanity, and paying $12 here and there just is not going to cut it.

If we are serious about retaining a hospitable climate, we need a fundamental re-evaluation of our entire way of life, and the only way that will come about is through changes in the fundamental stories we tell ourselves about life and what it means.

The notion of carbon offsetting is an offshoot of our deep cultural story that money equals value, and that the key way to contribute to something is to give money to it. Until this mindset changes, we will not find our way out of the mess into which we are hurtling head first. Douglas Adams put it well,

“This planet has, or had, a problem, which was this. Most of the people living on it were unhappy for pretty much all of the time. Many solutions were suggested for this problem, but most of these were largely concerned with the movements of small, green pieces of paper, which is odd because on the whole it wasn’t the small, green pieces of paper which were unhappy…”

And yet, for many it is becoming hard to even conceive of any way of measuring the value of life other than small, green pieces of paper, or computerised digits in a bank account. One good friend (and Philosophy graduate) memorably described money as the only way he knew to ‘keep score’ on his life. And in a world overwhelmingly dominated by money, it is all too easy to feel alone and lose resolve when trying to live by unpopular alternative beliefs.

Yet it is interesting to note that, as in so many cases, our intuitions and instincts do not seem to match with the beliefs we are conditioned to. One example would be the musicians who outright refuse to sell their songs to advertisers, despite that this is by far the most lucrative market for their art. I have heard it argued that “if they are so holy, why don’t they take the million dollars and give it to charity? After all, someone else will surely sell the advertisers a catchy song, and probably keep all the money for themselves”. Nonetheless, we instinctively feel a respect and admiration for their decision to turn down the easy buck. But why?

My theory is this. Even without studying the detail, we recognise that the whole financial system is designed in such a way that money flows inexorably to the top. That the bankers and financiers who to all intents and purposes run the system are essentially able to magic more money out of thin air than we could earn through a lifetime of hard graft. And that if this is so, then any decisions in the world that will be determined by money will be determined by them – despite all the lists of what could be done with the money, in reality a musician’s million dollars would barely make a dent.

All of which means that the only things which we do not cede to their control – the only things, if you will, that remain sacred – are those things on which we simply and absolutely refuse to put a price, whether that be a work of art, an entire natural environment, or the carbon cycle that maintains a benign climate.

Oscar Wilde wrote over a century ago that, “Nowadays people know the price of everything and the value of nothing”. This still rings true, but if we can avoid actually giving a price to everything, perhaps we will leave open the path back to real value.

Edit – 27 March 2012 – A noteworthy event today, Prof. Kevin Anderson of the Tyndall Centre for Climate Change Research – a man for whom I have great personal respect – has withdrawn from the Planet Under Pressure 2012 Conference due to being forced by the organisers to participate in carbon offsetting. He has explained his reasons, carefully justifying his belief that “offsetting is worse than doing nothing, it is without scientific legitimacy, is dangerously misleading and leads to a net increase in emissions”.