Land, and the army marching to claim it, in the UK and around the world

The right to access land matters, in a fundamental way. It is a place to live, a source for food, for water, for fuel, and for sustenance of almost every kind. And land management also has profound impacts on our ecosystems and environment, and thus on our well-being and our collective future. So it matters deeply that while UK supermarkets and housing estates find permission to build easy to come by, those who wish to use land to explore truly sustainable living are blocked and frustrated at every turn. It is this sorry state of affairs that has given birth to the "Reclaim the Fields" movement and activist groups like Grow Heathrow and the Diggers 2012. Inspired by the example of Gerrard Winstanley's 17th Century Diggers, these peaceful, practical radicals have moved onto disused UK land in order to cultivate it, build dwellings and live in common "by the sweat of our brow". In other words, they have asserted their right to simply exist on nature's bounty, seeking neither permission from anyone nor dominion over anyone; a right that they believe people should still share with the other animals. A right, indeed, that was enshrined in UK law in the 1217 Charter of the Forest. More recently, however, the strange young notion of owning exclusive rights to land has pushed back hard (as this excellent article documents). Thus, as they fully expected - and as happened to their forebears - the Diggers 2012's crops have been torn up and they themselves have been hassled, moved on and in some cases arrested. It might seem, then, that the efforts of these determined folk are being successfully repelled by 'the system', were it not for two crucial considerations - that they have history on their side, and that there is an enormous army surging at their backs. As we look around the world, we see them, from the likes of the 1.5m strong Landless Workers' Movement in Brazil and the vast international peasant's movement La Via Campesina, to the tens of thousands of Greek families deserting the cities to return to any land they can access and the immense - and successful - land rights march across India earlier this year. 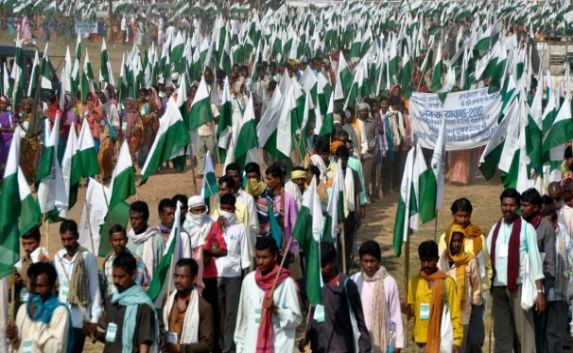 Meanwhile, closer to home, I see increasing numbers of my friends disillusioned and marginalised from the mainstream economy - ripped off by the banks, burdened with huge debts and struggling to find decent employment. As the inherently unsustainable financial economy continues to unravel, the people of England are not yet reaping the desperate consequences to the extent that those of Greece or India are, but it is growing even here, and it will come heavily home to this dark heart of the financial empire soon enough. For many, 'austerity' is already biting hard. Naturally, in such circumstances, we seek alternatives. Yet while some might wish to follow the example of those Greek families and earn a simple, honest life "by the sweat of our brow", rather than working frantically to earn 'a living' while paying off the debts incurred by a corrupt financial system, they are simply not being permitted to do so. New laws are being passed absurdly criminalising the likes of squatting and trespass (even against the wishes of the police forces), meaning that the police are being forced to step in on behalf of landowners. Meanwhile, planning policy reform makes it ever easier for corporations - and harder for families - to control land, leaving the courts obliged to prosecute those who wish to work to heal disused, neglected land instead of relying on state handouts to survive the vagaries of the employment market. The glaring injustice that has mobilised mass movements in the likes of Brazil and India is becoming ever more apparent here. Thus I see the tide of history at the backs of the Diggers 2012, with their direct action the vanguard of an inevitable UK movement to reclaim the land under our feet from the 1% - or 0.06% - who would call it theirs. 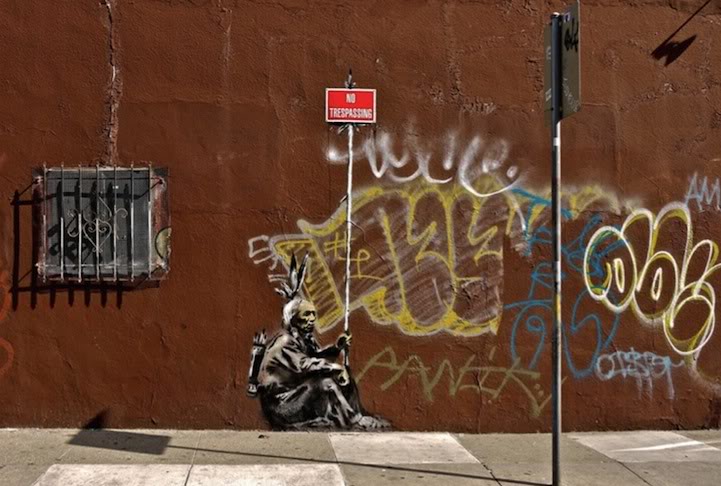 Yet, as with all influential movements for change in society, the activists cannot achieve much alone. Their direct action and willingness to put their bodies on the line powerfully expresses and demonstrates the ever-swelling public pressure, but if that pressure is to lead to a better society, rather than simply widespread frustration and anger, we also need positive lifestyle examples for law-abiding citizens to follow, complemented by the slow work of developing alternative legal and organisational forms that allow land to meet the pressing needs of the people. This is why this year I agreed to become a director of an organisation called the Ecological Land Co-operative, which exists to overcome the two great barriers to land for those wishing to establish ecological businesses and smallholdings - soaring land prices and simple legal permission. We are now on the brink of making our first area of land available, and my article in the latest edition of Permaculture Magazine (out now and highly recommended) explains how that has been done, as well as outlining the seven year journey to reach this point - with assistance from some of the leading experts on land reform - and our plans for the future. The photo at the top of this blog post shows that very piece of land; twenty-two acres in South-West England. Crowdfunding and community financing have also allowed us to work on a pair of research reports. The first - Small Is Successful - examined existing land-based businesses of 10 acres or less and evidenced the economically viable and highly sustainable nature of the livelihoods they provide, without any need for the subsidies on which large farms so often rely. The Research Council UK showcased this as one of a hundred pieces of UK research ‘that will have a profound effect on our future’, and we have also presented our message at the House of Commons, to the All Party Parliamentary Group for Agroecology. 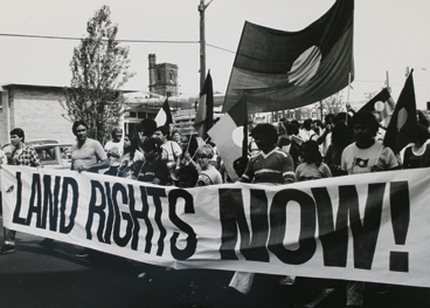 Our second research project has just begun; we are collaborating with others to produce a resource establishing both the current state of ecological farming in the UK - providing a single point of information on who is doing what and where, what acreages, to what markets, etc - and the current state of research into such agriculture. I see this work as supporting and strengthening the wider movement to reclaim land from the ecologically destructive, market-driven mainstream of conventional land use. Or, if that sounds a little grand, perhaps I can borrow from one who speaks more plainly? In the words of a U.S. farmer quoted in Colin Tudge's So Shall We Reap: "I just want to farm well. I don't want to compete with anybody." In this world of frantic capitalism, there is a radical thought if ever I heard one. It is a thought that inspires me. I feel more and more that the people the world needs most right now are not campaigners or activists, but such people who simply wish to live in relationship with a piece of land in a healing, productive and ecologically nurturing way. There is no shortage of them, and we should be making it as easy as possible for them to access land, without forcing them to launch political campaigns or planning permission battles in order to do so. Perhaps that vast and diverse movement - from La Via Campesina and the Diggers 2012 to the Eco Land Co-op - in truth has but one simple aim. To safeguard the quiet dignity of that farmer, and the billions like him. 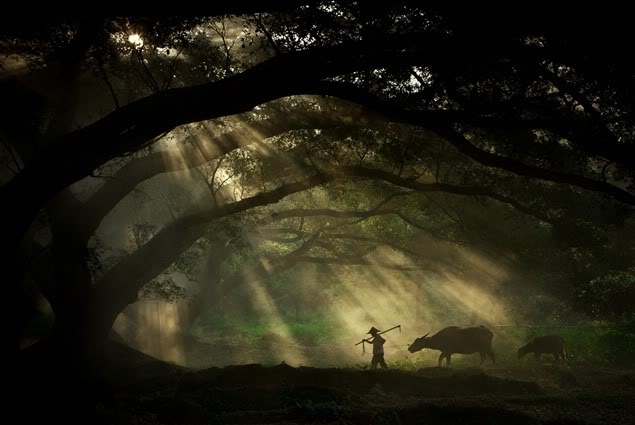 From the manifesto of The Land magazine: "...Rarely will you hear someone with access to a microphone mouth the word "land". That is because economists define wealth and justice in terms of access to the market. Politicians echo the economists because the more dependent that people become upon the market, the more securely they can be roped into the fiscal and political hierarchy. Access to land is not simply a threat to landowning élites — it is a threat to the religion of unlimited economic growth and the power structure that depends upon it. The market (however attractive it may appear) is built on promises: the only source of wealth is the earth. Anyone who has land has access to energy, water, nourishment, shelter, healing, wisdom, ancestors and a grave. ...Yet the earth is more than a tool cupboard, for although the earth gives, it dictates its terms; and its terms alter from place to place. So it is that agriculture begets human culture; and cultural diversity, like biological diversity, flowers in obedience to the conditions that the earth imposes. The first and inevitable effect of the global market is to uproot and destroy land-based human cultures. The final and inevitable achievement of a rootless global market will be to destroy itself. In a shrunken world, taxed to keep the wheels of industry accelerating, land and its resources are increasingly contested. Seven billion people compete to acquire land for a variety of conflicting uses: land for food, for water, for energy, for timber, for carbon sinks, for housing, for wildlife, for recreation, for investment. The politics of land — who owns it, who controls it and who has access to it — is more important than ever, though you might not think so from a superficial reading of government policy and the media. ...Rome fell; the Soviet Empire collapsed; the stars and stripes are fading in the west. Nothing is forever in history, except geography. Capitalism is a confidence trick, a dazzling edifice built on paper promises. It may stand longer than some of us anticipate, but when it crumbles, the land will remain."